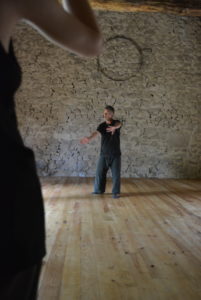 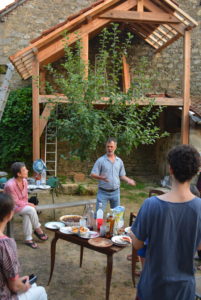 Jorge was born on 25th of April of 1963 in Estoril, Portugal and has been living in Paris since 1971.
He graduated from Le joueur regardé in 1989 under the direction of Daniel Postal. Jorge later trained with Jean-Paul Denizon, Guy Freixe and Gennadi Bogdanov.
After many years working as a professional actor, he decided to dedicate himself to voice, under the guidence of the esteemed Zygmunt Molik (co-founder of Jerzy Grotowski’s Teatr Laboratorium).  Jorge later complemented his research with Iseult Welsch (2000/2001), a master of Marie-Louise Aucher’s Psychophony.
Nowadays, along side his acting and directing career, Jorge is dedicated to teaching Molik’s method to theatre, music and movement professionals in Brazil, Croatia, England, France, Italy, Norway, Poland, Portugal and Thaïland.
Since 2005 he has lectured on the art of public speaking at the University Sciences-Po in Paris and is contributor in the project FORCCAST.