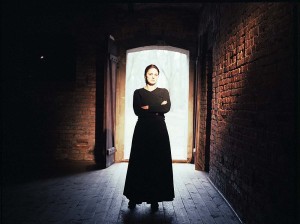 Ulyana is graduated from fine arts school of Lviv, Ukraine. As an artist, she works in the field of singing, theatre, as well as painting, stage design and costume. From 1998 to 2003, she worked as icon and monumental painting restoration in Ukraine and Poland. From 2002 to 2011, she corked as singer and actor among the ensemble « Maisternia Pisni » (www.maisternia.com.ua). She took part to several projects including “Rasa” and “Irmos”, and recorded 3 CDs : “On Sunday morning”, “After Christmas” and “Lightappearance”. Since 2011, she prolongs her artistic research both alone (she recorded the CD : « Dole ») and with others – various structures, visual artists and international musicians (notamment l’association artryptykh – www.artryptykh.com, le projet « Ultramarine », avec Klaus Kugel, Mark Tokar et Petras Vysniauskas). Masterclass –

The song is considered as a bridge between past and future, ancestors and descendants… There is a kind of personal sound inside each of us — peculiar like a fingerprint. Discovering of it gives a huge impulse for creation, awaking lulled zones in the body and minting the spirit. Opening of this sound is very important. It causes a wish to join, to become a complicit. And only when original internal personal sounds are meeting, the song appears — common for all and individual at the same time. It’s a meeting of people at crossroads… Investigation of sound goes through Ukrainian traditional songs: ritual, solo, polyphonic.

<<There is a way. Every year in the beginning of summer I walk it down the village, where my maternal ancestry originates. The way is lined with old linden and poplar trees. It rests in a enormous lake, which, as if prolongs it. The trees alongside stand like huge witnesses of time and people. The whole year I don’t see neither these trees nor the fields on the both sides of the way… That’s why every time this way is a starting point, beginning of the following. When you walk, you feel the rhythm of gait of many people, who walked there before. People-ancestors. There is knowledge – since I walk this way year by year, there is hope, that the successors of my kin will also know this way home. For me an old song is a way and a tree which testifies, and a field which stretches to the horizon… it is a bridge between that what was and what will be. For the song to be sang for real, it is important who and how sings it. With what sound. What sound? In each one of us there lives a primary sound. Native only to you and relating closely to your nature.>>