extracts from the public presentation given in La Métive, Moutier d’Ahun, the 5th of August 2011, in the frame of the programme “Lavauzelle année zéro”

Kalaripayatt is  a very old martial art coming from the state of Kerala, in the South of India. It dates back to the 10th or 11th century, which corresponds to the Middle-age of Kerala. Of course, fighting techniques were well known in Kerala beforehand – as we know thanks to old epic and mythological tales, such as Mahabarata or Ramanyana.

This martial art is not as well known as karate or kung-fu for instance. Furthermore, to speak about an indian martial art is always surprising people, since one always associate India with yoga and meditation, calm practices, whereas martial arts are often suggesting agressivity. The practice of Kalaripayatt, actually, is not an agressive activity, since it is always first of all a work on our bodies and our own selves.

What we know is that, approximately on the 9th and 10th centuries, Kerala was divided in small regions, or kingships. Each of them was ruled by a local king, who had his own army. They were recuited in a specific cast, called Naiars, or Nairs. They were the wariors, but as well traditional healers, massagists, and ayruveda practicionners. From the childhood (age 7), the boys were sent to a guru to train and prepare their bodies, towards flexibility and stamina, in order to bear very tough conditions. This techniques are also linked with the raise, in 15th and 16th century, of a new performative practice : Kathakali.

In 19th century, Kalaripayatt was forbidden by the English colonial rule, in order to avoid the rebels to be trained and dangerous. The weapons, in particular, were firmly prohibited.

Nowadays, many scool exist in the 3 styles of Kalaripayatt (the northern, southern and middle styles, each of them refering to Kerala’s geography). One can say that this martial art got quite popular. The interest of the westerners has an important role in this process, and represents a significant  economy.

The word Kalaripayatt is built on two terms : kalari (space) and payattu (fight, exercice). The practice is aiming first to prepare the body in order to work with partners, in contact or with weapons. One of the goals of Kalaripayatt is to understand how the body does function, how to get rid of the bad habits, and how to improve the sense of balance, coordination, and flexibility.

Then we have the empty-hands fight. Each fight is set by advance : it is made out of choreographies, learnt, where one is attacking and the other is defending. Then the roles are switched. Each element is meant to be learnt in the most precise possible way. Working with different partners, one should have the possibility to use instinctive reactions.

Kalaripayatt includes as well stick fighting, short stick, knife, triple sword, spear, club, sword and shield (the most noble ones), as well as a long sword-whip called urumi, which is very dangerous for both fighters.

Nevertheless, in kalaripayatt, we are not focusing merely on the fighting system. It is a whole system and art : one learns how the body operates, how to damage and repare its functions. This science is namely based on a precious knowlege, taught only drop by drop by the masters : the marmas. They are the vital points, the nervous and arterial centers.

Kalaripayatt is by principle connected with the art of healing. This practice is called Kalarishikitsa. One of its components is massage, divided in different types : the curative massages, adapted to different sort of problems, and those who aim to prepare the body and make it more flexible. They work on articulations, spine, muscles, veins and ligaments, and help the circulation of the blood, which makes the body healthier. One technique, namely, very specific to kalaripayatt, is using feet to masage the body.

To conclude, kalaripayatt is mostly art of fighting with our own selves. For students, the practice is much wider than training and fighting. It changes the physical consciousness of the student and questions his whole attitude towards the work on himself. For the apprentice, it is bringing marks and values, and becomes a way to live with oneself and others.

Justyna Rodzinska-Nair is, together with Sankar Lal Sivasankaran Nair, the co-founder of Studio Kalari in Wroclaw, an association supported by the Grotowski Institute. She is the author of a master’s thesis in Krakow, about Kalaripayatt and performing arts. 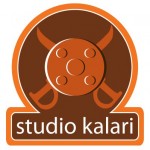